Open letter to the IOC

On September 7, the members of your Committee made a decision that Tokyo will host the 2020 Olympic Games. It is said that the speech given by the Japanese Prime Minister, Mr Shinzo Abe, played a critical role in your decision making process.
In his speech, Mr Abe said,” Some may have concerns about Fukushima. Let me assure you,  the situation is under control. It has never done and will never do any damage to Tokyo.”
Everything Mr Abe told you regarding the safety of Fukushima Daiichi nuclear plant is nothing but a shameful lie.

I will review them here one by one, and show you how malignant he and his lies are.

1) In response to questions raised, Mr Abe said: the contaminated radioactive water has been “completely blocked” within a 0.3 km^2 area in the harbour of Fukushima Daiichi plant.
This is an absolute nonsense that even a 6 year old could see through. How could such a strange harbour, which can be “completely blocked” from the rest of the sea, exist?
The following photo taken by Japan Ministry of Land, Infrastructure and Transport, clearly shows the absurdity of Mr Abe’s comment. 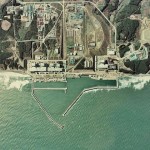 The harbour, which Fukushima Daiichi nuclear plant faces, is open to the ocean.
Just as any ship can come in and out of the harbour freely, so too can water, carrying contaminated water out into the ocean.

Furthermore, 18 days prior to Mr Abe’s speech, on August 21 2013, Tokyo Electric Power Company (TEPCO) had made an announcement that is contradictory to Mr Abe’s notions; it is highly possible that highly radioactive water that had pooled in underground trenches of Units 2 and 3 following the accident on March 11 2011, has leaked directly out to sea.
TEPCO estimates the amount of radioactive materials escaped to sea to be 1×10^13 becquerel (Bq) of strontium-90 and 2×10^13 Bq of caesium-137. This totals to 3×10^13 Bq.
Marine emission standard for nuclear plants under normal operating condition is 2.2×10^11 Bq . Since March 2011, the amount of contaminated water that has flown into the ocean is 100 times greater than the standard, and the leakage is still continuing.

2）Mr Abe said: “Let me assure you, the situation is under control.”
The facts indicate that the situation is anything but ‘under control’.
a) On September 24 2012, TEPCO announced the hourly emission of radioactive matter to be 1×10^7 Bq, equivalent to 2.4×10^8 Bq per day. This emission continues to date – a situation one can hardly say is ‘under control’.
b) By the end of August 2013, TEPCO has placed approximately 1000 tanks to store the highly contaminated water on site at Fukushima Daiichi.

These tanks (each containing 1000 L) are simply made by rolling up stainless steel plates into a cylinder and fixed by bolts rather than being properly welded.
The manager of the manufacturer of the tanks has commented as such: ”TEPCO only gave us a limited budget, so we have had to make each tank in a short period time, minimising cost of the production. Those tanks are not designed for long-term storage.” (August 25 2013, Mainichi Shimbun)
In fact the durability of the tanks are estimated to be 3 years at most. They are temporary and makeshift ‘solution’ to a long-term problem.

On August 20 2013, TEPCO admitted that 300 t of contaminated water had leaked from one of the tanks releasing 2.4×10^13 Bq of radioactive material (1 L of contaminated water contains 8×10^7 Bq).
According to Mr Hiroaki Koide of Kyoto University, this is almost the same quantity of radioactive material released by the US atomic bomb that was detonated over Hiroshima in 1945.
This means that each of the storage tanks contain more than 3 times the amount of radioactive material than one Hiroshima-class atomic bomb.
Those tanks are fragile, and the ground of the Fukushima Daiichi site is geologically unstable. And the tanks are placed on the ground without any solid foundation.
Large-scale earthquakes, or typhoons may easily topple those tanks.
If even a few of these tanks become damaged and released their contents, nobody will be able to enter the site of Fukushima Daiichi. Consequently, the essential cooling down operations of the nuclear reactors will cease, leaving all reactors to become uncontrolled.
The result will be a catastrophe – not only for Japan, but also for the whole world.
I am not exaggerating, I am simply anticipating.
My anticipation is all based on available information and the reality of the situation.

The number of these tanks will continue to increase. TEPCO needs to keep pouring seawater to cool the nuclear reactor, contaminating the water in the process. As the wastewater treatment plant has been damaged and is non-operational, a new tank is required every 2 and a half days to store the contaminated cooling water.

By no stretch of the imagination could one say the situation is “under control”.

3) Mr Abe said: Fukushima Daiichi “has never done and will never do any damage to Tokyo”.
a) Edo River is a river of Tokyo (Edo means Tokyo), which forms the border of Tokyo and Chiba prefectures. It is an important river supplying drinking water to Tokyo as well as to neighbouring Chiba.
Disturbing changes are happening in this river.
Analyses of Edo River carried out by the Ministry of Environment between September and November 2012 found that 1 kg of sediment from the riverbed contained greater than 100 Bq of radioactive material. The highest reading was from Urayasu Bridge area, with 2050 Bq/kg (sum total of radioactive iodine-131, caesium-134 and 137). Urayasu Bridge is mere 10 km away from the water purification plant in Kanamachi where water is drawn from Edo River.
Following their findings, Ministry of Environment explained “the water is drawn from the top of the stream and water itself shields the radiation from the riverbed sediments, hence there should be no influence”. But would this not change if the riverbed were stirred by heavy rains or typhoons?
b) On September 7 2013, the very day Mr Abe claimed that Tokyo would not be damaged by the release of radioactive materials, Chiba prefecture announced that an eel caught in Edo River contained radioactive dose of 140 Bq/kg. In light of this, Chiba prefecture called on three Fisheries Cooperatives to withhold their catch from the market.
Eel from Edo River is highly valued by food lovers of Tokyo.
It is a deplorable situation. When the river of Tokyo, Edo River is already in such a condition, how could one say “It has never done and will never do any damage to Tokyo”.
c) It is not just the waterway that is affected. In Edogawa council, which is the eastern part of Tokyo, many places record air radiation levels greater than 0.2 μSv/h (micro sievert/hour) and many in excess of 0.3 μSv/h.
Especially around Kanamachi water purification plant, air radiation level exceeds 0.45 μSv/h.
(http://www.radioisotope.jp/map/)
Safety standard set by ICRP（International Commission on Radiological Protection）is 0.23 μSv/h or 1 mSv/y.
Mr Abe’s comment is completely untrue – Tokyo is already damaged.

4) Mr Abe said: Fukushima “poses no problem whatsoever, the contamination was limited to a small area and had been completely blocked”.
a) A picture is worth a thousand words. Below is “The map of contamination” by Professor Yukio Hayakawa of Gunma University. 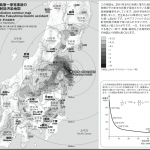 The contamination was NOT limited to a small area, but it has spread wide and far.
The map shows air radiation level in Tokyo was 0.125 μSv/h in September 2011. Before the accident of Fukushima Daiichi, the level in Tokyo was only around 0.02 μSv/h.
Tokyo is contaminated.
b) There is a report in which you the members of IOC would be interested.
This report was compiled by a group of citizens who measured air radiation levels at proposed Olympic Game sites.
（http://olympicsokuteikai.web.fc2.com/ Available also in English and French)
According to their report, at Yumeno-Shima Stadium, the proposed equestrian site, the air radiation level was 0.48 μSv/h – more than 4 times bigger  the safety standard set by ICRP .(ICRP safety standard set by ICRP  is 1mSv/y、or 0.114μSv/h.)
In addition, proposed sites for handball, cycling and weight lifting all recorded 0.15 μSv/h. This hourly rate exceeds the cumulative annual safety standard of 1 mSv/y set by ICRP, you cannot call Tokyo to be contamination free.

5) Mr Abe said: “there are no health-related problems until now, nor will there be in the future…I make the statement to you in the most emphatic and unequivocal way.”
a) The coast of Fukushima is one of the richest seas, with marine products that are both plentiful and of high quality. Many sought their livelihood from the fishing industry in the region.
This all changed after the Fukushima Daiichi accident. With fish in the region now contaminated by radioactive material, the Fisheries Agency imposed a voluntary restraint on all Fisheries Cooperatives. As a matter of fact fishing is now prohibited in Fukushima.
(http://www.jfa.maff.go.jp/j/koho/saigai/pdf/130311_torikumigyanjyou_jp.pdf)
b) Fukushima is also a major producer of rice in Japan. In 2011, after the nuclear plant accident, radioactive contamination was found in rice from some areas of Fukushima. Since then, consumers have stayed away from Fukushima rice.
After the Fukushima accident, the government prohibited growing rice in 7300 ha of rice fields within 20 km radius of Fukushima Daiichi nuclear plant. (Before the accident, they grew rice in 80 000 ha of rice fields.)
This year the government permitted growing rice in 2000 ha of rice fields in the once prohibited areas. However only 10% of those rice fields were actually used.
This fear and hesitation among the consumers to buy agricultural products from Fukushima is not restricted to rice but extends to all products including organically farmed produce and dairy products. What good is organically grown foods if they are contaminated by radiation?
Fishermen, farmers and anyone involved in those industries are facing a crisis. Their industries are paralysed and their livelihoods have been taken away. Their plight has been brought about by the sheer fact that foods contaminated by radioactive materials are hazardous to health. This indeed is a health-related problem.

Conclusion; There is no truth in Mr Abe’s speech made at the IOC General Assembly – it is nothing but a lie.

On September 8 2013, “Asahi Shimbun and Wire Reports” reported;
IOC members said Abe’s answers were crucial and helped dispel any doubts.  “People wanted to hear it and needed to hear it,” Canadian member Dick Pound said. “And he delivered on that. I think that was a real knockout answer.”

Tokyo won the 2020 Olympic Games hosting rights with 60 votes for Tokyo against 36 votes to Istanbul. This means 60 members of the IOC are in agreement with the above opinion of Canadian member Dick Pound.

I would like to ask those 60 members the following;
Were you not aware of the critical situation of Fukushima Daiichi nuclear plant?
If not, this  makes you extremely irresponsible and negligent. As members of the IOC, you are obliged to make every effort to know the most important and serious problems of candidate host cities: the critical situation of Fukushima Daiichi, which affects the safety of athletes and the spectators who will come to Tokyo from all over the world.
If you were aware and still voted for Tokyo, you knowingly agreed to jeopardize the safety of millions of people. You are all accomplices of Mr Abe who have outright lied to the world.

The crime of negligence and irresponsibility.
The crime of complicity in Shinzo Abe’s lies.
Which are you guilty of?